How Consultants can Handle Conflict of Interest in a Professional Manner 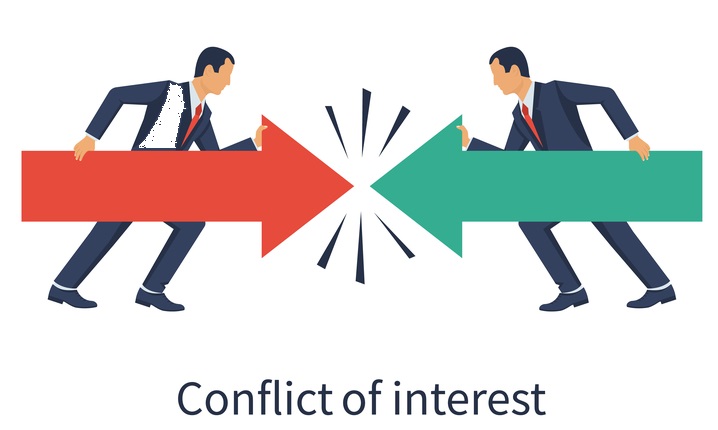 What is Conflict of Interest?

Working professionals in any organization have to contend with the organizational policies on Conflict of Interest. The term Conflict of Interest refers to the divided loyalties of the individual where he or she is violating the policy whenever he or she undertakes a parallel activity that is detrimental to their main employer. In simple terms, if an employee or an individual is earning money from a parallel activity such as writing and consulting to external entities and is also employed by an organization to which such activities cause monetary and nonmonetary losses, then it is taken that the employee is violating the terms of employment.

Further, if an elected representative indulges in accommodating favors to people who are under investigation for misconduct or holds an office of profit, then he or she is termed to have a conflict of interest. Indeed, conflict of interest arises whenever the individual earns monetary and nonmonetary gains from an activity that causes monetary and nonmonetary losses to his or her chief employer.

This is the reason many organizations have clearly laid down policies on conflict of interest specifying the types of parallel activities that the employees can and cannot indulge in. For instance, consultants who are executing an assignment for a client cannot take money from the client or ask or accommodate favors since the primary job of the consultant is with the firm that has engaged him or her. In this case, consultants are duty bound to inform their employers whenever their clients ask favors from them or request them to indulge in a parallel activity that is in conflict with the main activity. It needs to be mentioned that even gifts given by the client sometimes attract the provisions of conflict of interest and this is the reason why many organizations mandate disclosure of all gifts taken from the clients as well as prohibit gift taking without necessary permissions from the consultant’s superiors.

Further, consultants also face conflict of interest when they are privy to insider information such as the news about upcoming mergers and acquisitions which can be used for monetary gains such as trading on stocks of the companies that they have insider information about. In this instance, such conflicts of interest are viewed very seriously by the regulators who in recent years have not even hesitated in sending such violators when the individuals who have violated insider trading laws are found guilty. In addition, consultants might be asked by their clients to fudge the financial statements or to approve fudged financial statements as well as to provide grossly overvalued figures about the company’s financial position. In all these cases, the consultants have to be wary of the true intentions of the clients in addition to being careful about not breaking the law.

How Consultants can Handle Conflicts of Interest

While it is human nature to succumb to temptation, the consultants must keep in mind that they are accountable to not only their organizations and the shareholders of the clients but also have a duty and responsibility towards the wider society. In other words, while the temptation to take gifts and other monetary and nonmonetary inducements is indeed high, ethics and ethical norms dictate that they behave according to the highest standards of corporate behaviour.

In addition, as mentioned earlier, regulators in recent years have been cracking down hard on the violators and hence, consultants must be cognizant of the illegal nature of activities that entail conflict of interest. Moreover, many organizations in the aftermath of the 2008 financial crisis have tightened rules and regulations so that even minor violations are being dealt with harshly.

The Softest Pillow is a Clear Conscience

Finally, any profession has the potential for earning money through dubious means. In cases where professionals encounter conflict of interest, it is advisable to report the matter to their managers or to the compliance team anonymously if they feel that their managers are encouraging them to violate rules. In addition, consultants must turn whistleblowers if their concerns are not being addressed in cases where there is systemic abuse and misuse and violation of rules. It is also the case that one’s conscience must dictate how one must act in these circumstances even if one’s job is on the line. After all, one can get hired elsewhere but the damage to the reputation as well as the fact that the lingering notions of wrong doing would haunt them. As the founder of Infosys, NR Narayana Murthy once remarked, The softest pillow is a clear conscience.