As a team of professional local consultants with the language skills, industry knowledge, and culturally savvy. We carefully craft a unique Myanmar approach to address each client’s specific situation, maintaining the highest standards of quality and confidentiality.

Omega project partners with some of Myanmar’s leading business consulting companies, such as Myanmar Business Answers (MBA). Together, we offer superior services both in quantitative and qualitative research, legal consulting, sales development with on-field support, everything to help your business. By joining forces now, we have a team of Thais / Myanmar’s and expats with a combined 50-plus years experience in the business support and administrative needs. 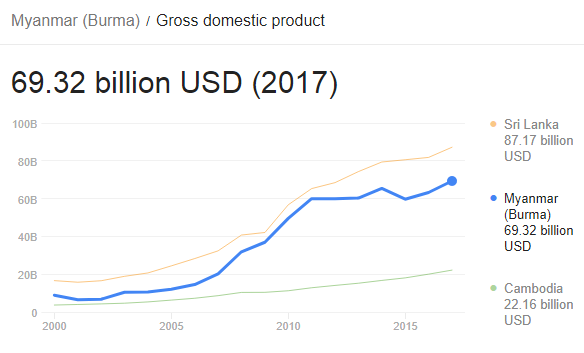 In 2011, when new President Thein Sein’s government came to power, Burma embarked on a major policy of reforms including anti-corruption, currency exchange rate, foreign investment laws and taxation. Foreign investments increased from US$300 million in 2009-10 to a US$20 billion in 2010-11 by about 6567%. Large inflow of capital results in stronger Burmese currency, kyat by about 25%. In response, the government relaxed import restrictions and abolished export taxes. Despite current currency problems, Burmese economy is expected to grow by about 8.8% in 2011. After the completion of 58-billion dollar Dawei deep seaport, Burma is expected be at the hub of trade connecting Southeast Asia and the South China Sea, via the Andaman Sea, to the Indian Ocean receiving goods from countries in the Middle East, Europe and Africa, and spurring growth in the ASEAN region.

In 2012, the Asian Development Bank formally began re-engaging with the country, to finance infrastructure and development projects in the country. The $512 million loan is the first issued by the ADB to Myanmar in 30 years and will target banking services, ultimately leading to other major investments in road, energy, irrigation and education projects.

In March 2012, a draft foreign investment law emerged, the first in more than 2 decades. This law oversees unprecedented liberalisation of the economy. It for example stipulates that foreigners no longer require a local partner to start a business in the country, and are able to legally lease land. The draft law also stipulates that Burmese citizens must constitute at least 25% of the firm’s skilled workforce, and with subsequent training, up to 50-75%.

On 28 January 2013, the government of Myanmar announced deals with international lenders to cancel or refinance nearly $6 billion of its debt, almost 60 per cent of what it owes to foreign lenders. Japan wrote off US$3 Billion, nations in the group of Paris Club wrote off US$2.2 Billion and Norway wrote off US$534 Million. 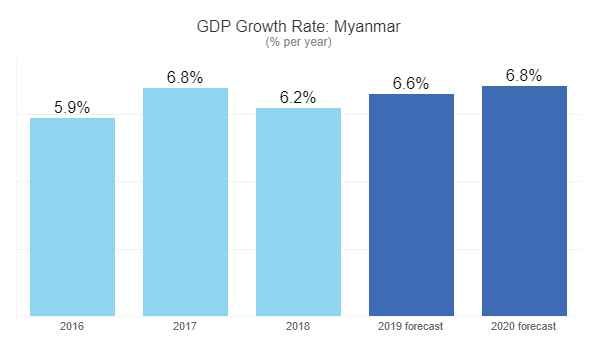 Myanmar’s inward foreign direct investment has steadily increased since its reform. The country approved US$4.4 billion worth of investment projects between January and November 2014.

According to one report released on 30 May 2013, by the McKinsey Global Institute, Burma’s future looks bright, with its economy expected to quadruple by 2030 if it invests in more high-tech industries. This however does assume that other factors (such as drug trade, the continuing war of the government with specific ethnic groups, etc.) do not interfere.

As of October 2017, less than 10% of Myanmar‘s population has a bank account. As of 2016-17 approximately 98 percent of the population has smartphones and mobile money schemes are being implemented without the use of banks similar to African countries.

The major agricultural produce is rice which covers about 60% of the country’s total cultivated land area. Rice accounts for 97% of total food grain production by weight. Through collaboration with the International Rice Research Institute (IRRI), 52 modern rice varieties were released in the country between 1966 and 1997, helping increase national rice production to 14 million tons in 1987 and to 19 million tons in 1996. By 1988, modern varieties were planted on half of the country’s rice fields, including 98% of the irrigated areas. In 2011, Myanmar’s total milled rice production accounted for 10.26 million tons, an increase from the 1.8 per cent back in 2010.

The lack of an educated workforce skilled in modern technology contributes to the growing problems of the economy.

Lately, the country lacks adequate infrastructure. Goods travel primarily across Thai and China borders and through the main port in Yangon.

Railroads are old and rudimentary, with few repairs since their construction in the late nineteenth century. Presently China and Japan are providing aid to upgrade rail transport. Highways are normally paved, except in the remote border regions. Energy shortages are common throughout the country including in Yangon. About 30 percent of the country’s population is without electricity, with 70 per cent of people living in rural areas.The civilian government has indicated that electricity will be imported from Laos to fulfill demand.